Hurricane Ida made landfall near Port Fourchon, Louisiana, early Sunday afternoon as an extremely dangerous Category 4 hurricane with winds of 150 mph, the National Hurricane Center said.Ida, striking on the 16th anniversary of the historically devastating Hurricane Katrina, tied as the state’s most powerful storm ever with Laura from last year and the Last Island Hurricane of 1856.Louisiana Gov. John Bel Edwards said Sunday Hurricane Ida is one of the strongest storms to make landfall in Louisiana in modern times, as it rapidly intensified at an unprecedented rate, right up until the 1 p.m. landfall. 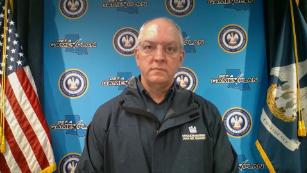 Louisiana Gov. John Bel EdwardsEdwards urged residents to remain indoors and to be patient, as the state does not know how soon first responders would be able to respond to calls for assistance.

“Once the storm has passed, you need to be prepared to shelter in place for the first 72 hours,” Edwards said. “We have every possible resource ready to go, to help you. We’ll get there sooner than 72 hours if at all possible, in order to rescue people across the state of Louisiana.”

Sign up for email updates for significant stormsEnter your email to sign up for CNN’s “Meanwhile in China” Newsletter.close dialog

Get the latest storm and extreme weather updates delivered straight to your inbox from CNN.Sign Me UpBy subscribing you agree to ourprivacy policy.Edwards also told CNN’s Jake Tapper on “State of the Union” that his state “is as ready as we can be,” but he expects Ida to be “a very serious test of our levy systems, especially in our coastal Louisiana.” He later said the state doesn’t anticipate any overtopping of the Mississippi River levees, or overtopping of the levees in the hurricane risk reduction system around the Greater New Orleans area.

Live updates: Hurricane Ida heads toward the Gulf CoastThe state invested significantly in shoring up the levy system after the catastrophic failure after Katrina. Edwards said Ida “will be the most severe test,” but he expects the levees to hold. “The next 24, 36 hours are just going to be very, very critical for us here in Louisiana.”The Louisiana National Guard has been activated, with more than 4,900 guardsmen staged across 14 parishes. They have 195 high water vehicles, 73 boats and 34 helicopters ready to support and assist residents, the governor said.Ida became a Category 4 storm early Sunday morning, rapidly intensifying to sustained winds of 150 mph, according to the National Hurricane Center.

Hurricane Ida hit the oil industry hard as it headed to New OrleansThe storm’s maximum sustained winds are down to 145 mph, according to the 3 p.m. ET NHC update. It’s located 25 miles southeast of Houma, Louisiana, moving northwest at 12 mph.By Sunday afternoon, Hurricane Ida had left more than 400,000 customers without power in Louisiana, according to poweroutage.us. And Energy Louisiana said some of its customers could be without power for weeks.